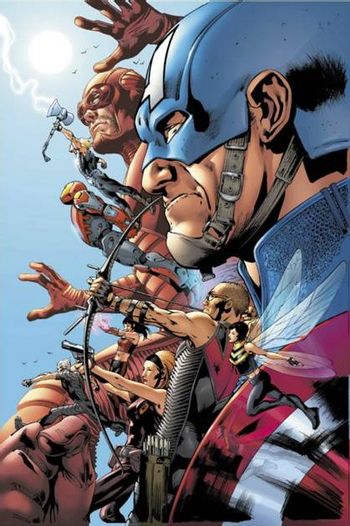 Earth's Mightiest Heroes, only bigger jerks than usual.
"The idea behind The Avengers is that the Marvel Universe's biggest players all get together and fight all the biggest supervillains they can't defeat individually, whereas Ultimates 2 is an exploration of what happens when a bunch of ordinary people are turned into super-soldiers and being groomed to fight the real-life war on terror."
— Mark Millar
Advertisement:

Marvel Comics' reimagining of The Avengers as part of their new Ultimate Marvel continuity, courtesy of Mark Millar and Bryan Hitch. As the above quote says, this series is not merely a retelling of the classic crossover superhero team, but goes the extra mile and reimagines the Avengers in this reality as a superhuman strike force team founded by S.H.I.E.L.D. as an attempt to curb the rising threat of super terrorism and other Persons of Mass Destruction. Originally launched in 2002, the first miniseries saw the iconic group go up against one of their own after Bruce Banner hulks out during a personal meltdown and later uncover an ancient alien conspiracy by a race called the Chituari, who have been plotting world domination as far back as World War II.

The Ultimates 2 deals with other countries taking issue with America using the Ultimates on their soil whether they ask for it or not, eventually culminating in a rival superpowered squad called "The Liberators" giving America a taste of their own medicine, as well as a mole personally orchestrating much of the events of the volume behind the scenes... with some help from a higher power.

The first two volumes of the Ultimates were well received and their take on classic characters and even storylines can be felt all over in the Marvel Cinematic Universe. The Ultimates 3 was penned by Jeph Loeb and drawn by Joe Madureira. Due to Loeb not being familiar with the source material (leading to the Wasp being retconned to be white when she was previously established as being of Asian ethnicity, for example) and suffering personal problems at the time he wrote it, the 3rd volume of the Ultimates wasn't very well received and led to the universally reviled event known as Ultimatum. After that, the concept was rebooted into two series: Ultimate Avengers and New Ultimates. Ultimate Avengers, by Millar and various artists was told over the course of 3 six issue arcs, centering on the returned Ultimate Nick Fury, Hawkeye along with featuring new Ultimate versions of Marvel characters and original creations for the team of Black Ops super heroes. New Ultimates by Loeb and Frank Cho told the story of most of the remaining original Ultimate team, including Captain America as they faced off against another threat.

Following Cataclysm, the title was relaunched as part of the Marvel NOW! initiative with a brand new cast and creative team. Written by Michel Fiffe and drawn by Amilcar Pinna, the book featured Spider-Man (Miles Morales), Cloak and Dagger, Kitty Pryde, Bombshell, and the newest Black Widow (Jessica Drew). The title ended in January 2015.

Following Secret Wars, The Ultimates were revived as part of the All-New, All-Different Marvel initiative in October 2015, though this iteration of the team didn't feature characters from Earth-1610, but rather: Black Panther, Blue Marvel, Captain Marvel, Monica Rambeau, and America Chavez. Their first enemy? Galactus. Both teams would meet in Ultimates 2 #100.

The comic's main series was made up of the following series:

Tropes in the Ultimates include: