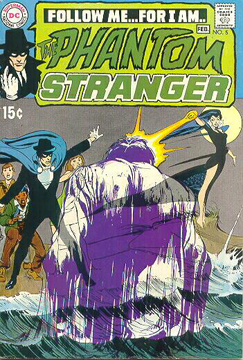 Please note he's wearing a cape, NOT a trenchcoat!
"I am known in many realms by many names, Bartholomew Allen, but those that know me in your world call me the Phantom Stranger. I work in-between worlds, an agent of destiny and the Fates, restoring order and balance where chaos has lain her hands."
— The Phantom Stranger explains himself to a confused Impulse (Impulse #87)
Advertisement:

The Phantom Stranger is the most mysterious of DC Comics' characters: even though he's been around since 1952, his full origin, his identity or even the full extent of his powers has never been revealed. Of course, being mysterious is his main gimmick, so this is intentional.

The character debuted in Phantom Stranger vol. 1 #1 (August-September, 1952), created by John Broome and Carmine Infantino. His original series only lasted 6 issues ending in June-July, 1953. He was revived in Showcase #80 (February, 1969). Then received a second series named after him, which lasted for 41 issues (May-June, 1969 - February-March, 1976). When that series ended, the Stranger started making guest appearances in series devoted to the Justice League of America, Swamp Thing, etc. He has never quite faded away.

The character has changed over the years, though. Originally, he was mostly a host of mysteries involving the supernatural, that he would help debunk... only to leave other people wondering if he was a supernatural being. Ironically, when the Stranger was a guest in some of Doctor Thirteen's (another DC ghost debunker) own stories, he was the subject of the Doctor's attention, but Thirteen could never prove that the Stranger wasn't a magical being.

By the time the Stranger entered the larger DC Universe, it was decided that he was indeed magical, but still little else was revealed about him. He almost always appears to help other heroes deal with a magical menace that they can't handle alone- though his help would always be minimal, only taking a direct hand when absolutely needed. Whether he did this because he saw his job as being helping others to help themselves, or because some Powers That Be limited his actions, or that meddling too much would invariably make things worse, has never been made clear.

The Stranger has starred in his own series, and he did have his own supporting cast, including: Cassandra, a blind psychic who was in love with him; Tannarak, an alchemist obsessed with immortality, an occasional ally; and Tala, a demonic sorceress, best known for being Lex Luthor's moll in the animated Justice League series. Most of these have not been seen in years, though.

The Stranger has an habit of appearing (and disappearing) when nobody is looking, like a leprechaun, which most people find very annoying. He often works with other DC and Vertigo mystics, notably John Constantine, Doctor Occult and Mister E, who are known as the "Trenchcoat Brigade" (though the Stranger wears a cape, not a trenchcoat.)

One of the more unusual moments in the Stranger's publishing history involves Secret Origins, the 1980s anthology series that existed to provide origin stories for those characters who had never been given one before. (Inexplicably, the issue was a crossover tie-in to Legends.) The Phantom Stranger issue contains not one but four origin stories, each by a different writer and each giving different answers to the questions of who the Stranger is, where his powers came from, and why he walks the earth. (Each story also gives a different answer to the question of what color the Stranger's hair was before it was white. It's the little touches...). Here are the options:

It is, of course, entirely possible that none of these are his real origin, but something else entirely is. In fact, considering both the nature of The Stranger and of the DC Universe, it's equally possible that all of them are true, plus however many others you'd care to imagine. (The New 52 has given him a new origin, which is presumably canon for the moment; he was one of three beings punished by the gods of the Rock of Eternity for their sins against magic, and it's heavily implied that he's Judas Iscariot.) With the advent of the DC Rebirth soft reboot, however, he is no longer bound by the events of New 52, and is back to being the same enigmatic fellow he was before.

Contrary to what many fans believe, the origin story that claims the Stranger is a half-fallen angel (that is, he stayed neutral during Lucifer's Rebellion and isn't welcome in either Heaven or Hell as a result) is not the Stranger's official origin, although it is the most popular (being written by Alan Moore probably didn't hurt). Nor are his powers limitless, as he has been seen struggling against magical opponents such as Tala. In fact, it's implied all Phantom Stranger incarnations are the same Phantom Stranger, just as all depictions of Mr. Mxyzptlk are the same character, and both the Stranger and Mxy have Medium Awareness.

He has an unique relationship with The Spectre, the only other DC character with comparable nature and powers. The two are quite associated to each other through continuities, though they are alternately presented as Headbutting Heroes, Arch Enemies or even Those Two Guys in Batman: The Brave and the Bold. The New 52 upgraded their relationship by tying their origins together and having The Voice make them unlikely (and bitter) allies.

However, he is a member of the Justice League of America, though he still doesn't show up except when they need his help- they can't contact him. The Stranger appeared in his own DC Showcase short, DC Showcase: The Phantom Stranger, as an extra short in Superman: Red Son.

Note also that the Stranger does not wear a mask — that's just an (intentional) visual effect, the shadow of his hat on his face. However, the shadow still appears even when he's wearing a Santa hat, or even no hat at all. He's just that awesome. (His hair, by the way, is white.)