Comic Book / The Legend of Korra: Ruins of the Empire 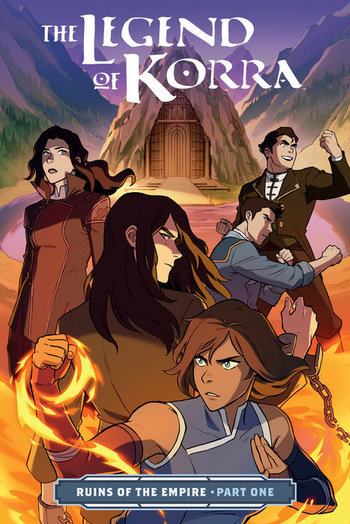 Ruins of the Empire is a graphic novel trilogy set in the Avatar universe, following the events of The Legend of Korra: Turf Wars. The second graphic novel trilogy based on The Legend of Korra, it is written by franchise co-creator Michael Dante DiMartino, with art by Michelle Wong and Killian Ng. The first issue of the series was released on May 21, 2019, with the second released on November 12 and the third on February 25, 2020.

The Earth Kingdom prepares for its first elections, but finds itself threatened by its past when remnants of the Earth Empire seek to undermine the nation's democratic efforts, even as Kuvira stands trial for her crimes. When Korra, Asami, Mako and Bolin don't see eye-to-eye on the situation, Korra must decide who to trust as drastic measures are taken to halt a new march to war.

The Legend of Korra: Ruins of the Empire provides examples of: