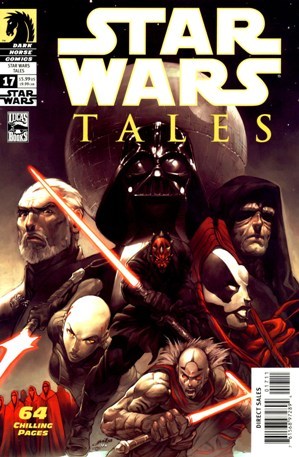 An anthology comic book series in the Star Wars Legends, Star Wars Tales was one of several series released to cash in on the release of The Phantom Menace. It ran for about five years and told the stories of characters from the films, existing Expanded Universe material or completely new protagonists. Stories could focus on any number of ideas - some were serious and dramatic while others in the same issue could be straight-up comedies or parodies; some were action-oriented while others relied on mystery and suspense. In short, there was something for just about every Star Wars fan to enjoy.

The canonicity of the series was disputed. The first twenty issues were officially classified as "Infinities" stories, meaning they were completely non-canonical, although some characters, concepts and stories appearing in these issues have been referenced in other EU works. The last five issues of the series, published after long-time editor Dave Land stepped down, were canonical so long as they don't conflict with established ideas. As of the Disney buyout and the old expanded universe being declared its own separate continuity from the current timeline, the stories are solely part of the Legends universe now.