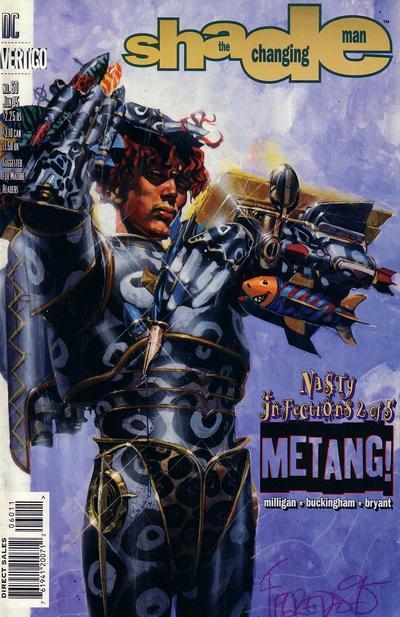 Shade in his armor on the cover of issue 60.
"At this point I started to lie. And as I lied, I realized I might be telling the truth. This often happens to me."
— Shade, The Passion Child

Originally a short-lived series created by Steve Ditko, Shade ran from 1977-78 before its sudden cancellation. Like many other Silver Age heroes he got a thorough Continuity Reboot under DC Comics's Vertigo imprint; the alien fugitive with a technological gizmo was replaced by a soulful poet from a parallel Earth who could warp reality.

The reboot was written in 1990 under Britwave author Peter Milligan and then-fledgling artist Chris Bachalo. Like the work of previous British authors Neil Gaiman, Grant Morrison and Alan Moore, the series was highly experimental, combining history, mythology, literary allusions, and genre deconstruction. The series would run seventy issues, reaching its conclusion in 1996.

The series focuses on Shade, a dimensional traveler with reality-altering powers. In the Vertigo title, he is unceremoniously dropped into our dimension, where he becomes involved in the life of a young woman named Kathy, still reeling from the brutal murder of her boyfriend and parents. He soon turns her life upside-down as he fights against physical manifestations of madness, of his own desires, and of the breakdown of American culture. He fights fire with fire by harnessing the power of Madness using the "Madness Vest" (the "M-Vest" in the Ditko era). However, things quickly turn more complicated...

The externalization of shifting ideas forms a central theme throughout the series, exploring belief, creation, madness, and the instability of identity. The focus of the series was usually on character interaction, psychological changes, and human relationships, even as the overarching plot grew increasingly climactic and fantastical. The series never shied away from controversy, dealing openly with transgenderism, homosexuality, murder, and interracial relationships.

The series has a cult following, but the complete series is difficult to find, with only the first nineteen issues having been republished as trades. DC is in the process of releasing individual issues digitally. In 2003, original author Peter Milligan teamed with Madman artist Mike Allred to write a one-off Shade story for Vertigo's tenth anniversary special; in 2011, Shade appeared in Flashpoint as the leader of the Secret Seven, and also appeared in the New 52 series Justice League Dark. In 2013 a one-shot short in the DC Nation block on Cartoon Network heralded his first animated appearance; this incarnation is often regarded by fans as being a (benevolent) Lord of Chaos.

In 2016, DC announced Shade, The Changing Girl, by writer Cecil Castellucci and artist Marley Zarcone, as one of the titles under Gerard Way's Young Animal imprint, featuring a female alien, Loma Shade, with the Madness Vest and hiding out in the body of a 16-year-old girl. After the "Milk Wars" crossover, it was relaunched as Shade, The Changing Woman.

Has no relation to the Golden Age Flash villain.