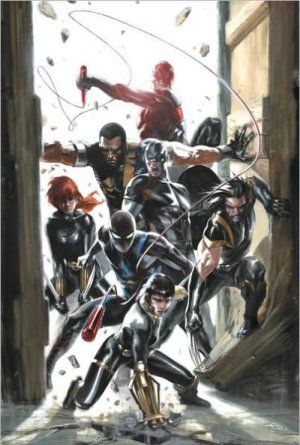 Secret War was a 2004 storyline of Marvel Comics, written by Brian Michael Bendis. Despite the similar name (in singular instead of plural), it has no relation with the 1980's Secret Wars crossover, or the 2015 crossover of the also identical name. No, we don't know why three different Marvel stories all have the same name.

There are many minor villains in the Marvel Universe with technology-based powers. S.H.I.E.L.D. finally began to think: how can those villains pay the huge costs of their technology, with their small petty crimes?. The answer: because Latveria (ruled by Lucia Von Bardas at the time) is financing them to cause mayhem in the U.S. Nick Fury explains all this to the president, but he is ignored: the president is in good diplomatic terms with Von Bardas. As he was sure that allowing the situation to continue would call for a huge disaster, Fury organizes a secret covert team to infiltrate Latveria and stage a coup against Von Bardas. Those heroes were Captain America, Spider-Man, Daredevil, Luke Cage, Wolverine, and S.H.I.E.L.D. agents Black Widow and Daisy Johnson. And when they had done it, Fury erased their memories of the whole thing, except for the two agents.

All that took place a year back. In modern day, all those who were involved in that operation (but didn't remember) were starting to be attacked, and begin finding clues of what happened a year before. It ends with a big fight against a cyborg Lucia Von Bardas, aided by all the petty criminals who use her technology. She is defeated, and the whole coup attempt is finally outed. Nick Fury then announces to the supeheroes that he will now became clandestine.