Comic Book / RoboCop Versus The Terminator 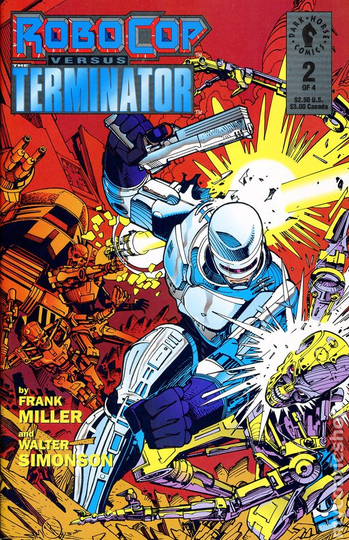 RoboCop Versus The Terminator is a crossover setting which has RoboCop fighting the Terminator in a shared universe. Its main entries are a 1992 limited series comic and a 1994 video game for Sega Mega Drive/Genesis and Super NES.

The miniseries (written and drawn by Frank Miller and Walt Simonson) is a fairly intricate time-travel story where a resistance fighter named Flo in the post-Judgment Day hellhole manages to break into a Skynet database, learning that Skynet only became self-aware by co-opting the mind of, you guessed it, RoboCop.

Quite possibly the only RoboCop storyline where the person out to kill Murphy isn't a Corrupt Corporate Executive seeing him as an obstacle to nefarious profiteering schemes, but, rather, one of the good guys seeking to achieve a greater good. And it hammers this point home pretty strongly when, very early on, Flo arrives in the past, builds a futuristic energy weapon with her knowledge of future Phlebotinum, and succeeds in vaporizing RoboCop's head with it.

Unfortunately for Flo, but fortunately for Murphy, this story's interpretation of the Terminator Timey-Wimey Ball is that changes in the timeline don't process instantly, but take "time" to ripple forward, giving Skynet the chance to make a last-ditch effort at saving itself by sending Terminators after Flo to stop her from altering the timeline in the first place.

While the story eventually ends with the good guys completely victorious, the trip getting there involves a crazy succession of plot twists. Two more major alterations to the past result in the Terminators winning, only for RoboCop's conciousness to re-assert itself in the future, causing events that prevent Flo from ever going back in time to begin with, and defeating Skynet completely just for access to the time-travel technology so he can go back in time and solve the problem with More Dakka.

Now available in Epic Rap Battle, DEATH BATTLE!, and — thanks to both being Guest Fighters — Mortal Kombat 11 forms.

RoboCop Versus The Terminator provides examples of: