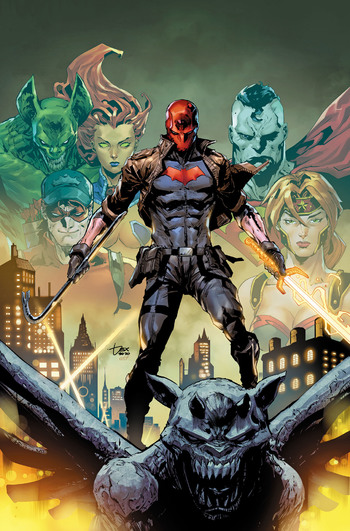 Clockwise from centre: Red Hood, Arsenal, Crux, Starfire, Bizarro and Artemis.
"The only reason I’m here is ’cause if anything happens to you–that would make me the worst former sidekick ever."
— Jason Todd to Roy Harper, Red Hood and the Outlaws #1
Advertisement:

Red Hood and the Outlaws is a comic book series released as part of DC Comics' reboot initiative New 52. It follows former Batman sidekick Jason Todd (the second Robin) as the titular Red Hood, a dual-wielding pistol marksman, accompanied by Green Arrow’s former sidekick Roy Harper, originally Speedy and now Arsenal, a skilled archer and damaged soldier of fortune, and the alien princess Starfire, former Teen Titan as well as former prisoner of intergalactic war who won’t be chained again. Scott Lobdell conceived and wrote the majority of the series from 2011 until 2020, with a break from June 2013 to July 2014 wherein James Tynion IV and then Will Pfeifer wrote the series.

In June 2015, the book was retooled into Red Hood/Arsenal, while Starfire was spun off into her own solo ongoing, Starfire (2015). In 2016, the title returned as part of the DC Rebirth initiative, with Red Hood recruiting Artemis and Bizarro, forming a dark counterpart for DC's Trinity.

The series went under a minor retooling in September 2018, with Jason going on his own and the title changing to Red Hood: Outlaw, now dropping his compunctions since losing his friends and Roy's death as a result of Heroes in Crisis, back to a mad-as-hell Pragmatic Hero who kills criminals and villains freely as he had when he fist became Red Hood. Lobdell's 9-year run ended with issue 50. Issues 51 and 52 saw Shawn Martinbrough writing a two-issue story for the series, now renamed to just Red Hood but retaining the numbering of the Rebirth series.

After almost ten years of publication, the series finally ended in December of 2020.

This work is part of the following storylines: