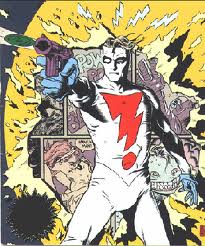 An independent comic book superhero created by Michael Allred. The series revolves around an amnesiac reanimated corpse and the adventures he has. The series is known for its quirkiness and its ability to go from wacky to disturbing in the span of a few panels.

Eccentric scientists Dr. Boifard and Dr. Flem came upon a horrific car accident one night and discovered a dead John Doe. They decided it was a good idea to use the cadaver as a guinea pig for their new reanimation experiment. It was a success and Madman was born. Calling him Frank Einstein, they studied him and used him as a lab assistant along with the beautiful Joe (Joesephine) Lombard, whom Frank quickly fell in love with. Using his superhuman agility, Psychic Powers, and gadgets, he fights crime when his scientist friends aren't getting him into trouble. He has also had stints as a circus performer and professional psychic.

Frank has gone through time, fought an Ancient Conspiracy, aliens, monsters, robots, and even had a stint on a Super Team called The Atomics. The series combines horror, science fiction, and pop culture in a way few series can, amassing a cult following in the process. Considered a Long Runner for an indie comic, the series has also earned many awards.

Not to be confused with the film Madman.