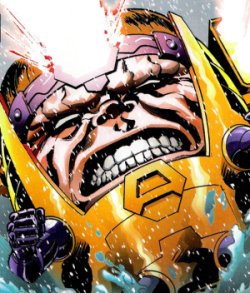 "If you think I've evolved beyond the joys of murder, you'd be wrong."
Thor: Tis some kind of... of... That is a very big head.
M.O.D.O.C.: I AM M.O.D.O.C.! I am the ultimate in human-machine interface! I am designed ONLY FOR CONQUEST!
The Wasp: Whatever you say, freak-show.
— The Avengers: Earth's Mightiest Heroes!

M.O.D.O.K. is a Marvel Comics super-villain created by Stan Lee and Jack Kirby. Making his Silver Age debut in Tales of Suspense #93 (September, 1967), M.O.D.O.K. has been featured in over 40 years of Marvel canon. While originally a foe of Captain America, M.O.D.O.K is not tied to a single hero's Rogues Gallery. He has battled the likes of The Falcon, Nick Fury and S.H.I.E.L.D., Iron Man, Namor, the Incredible Hulk, rival villains Mad Thinker and Yellow Claw, Ms. Marvel, the Champions (Angel, Iceman, Black Widow, Darkstar, Ghost Rider, and The Incredible Hercules), the Thing, and the Serpent Society. The latter group managed to assassinate him back in 1986. But M.O.D.O.K. was revived in 1995 and has remained a prominent villain since then. In 2009, IGN.com ranked M.O.D.O.K. #100 on its Top One Hundred Comic Book Villains list.

A lowly technician working for Advanced Idea Mechanics (A.I.M.), George Tarleton was nothing special. One day, Tarleton is picked by A.I.M.'s Scientist Supreme to be genetically altered into a living computer code-named M.O.D.O.C.: Mental Organism Designed Only for Computing. The experiment was a success: Tarleton's brain became enormous, granting him superhuman intelligence and vast psionic powers. Driven mad by the procedures performed on him, M.O.D.O.C. kills his masters in cold blood. Enjoying the slaughter, M.O.D.O.C. renames himself M.O.D.O.K: Mental Organism Designed Only for Killing. Having eliminated the existing command structure, M.O.D.O.K. takes over A.I.M, declaring himself the new Scientist Supreme.

In addition to these, he was included in The Marvel Experience virtual reality tour in the United States, where he was voiced by Kevin Smith.

Tropes associated with M.O.D.O.K. include: