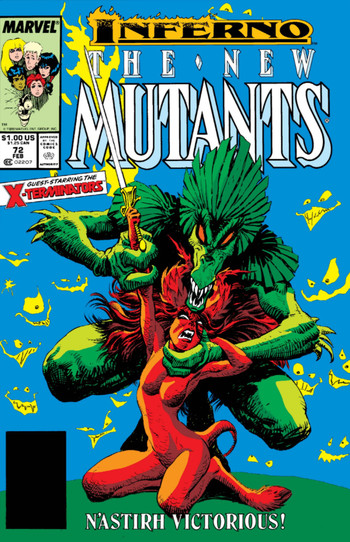 Inferno was a Marvel Comics comic book crossover from 1988-1989. The basic premise was that New York City was literally turned into a hell (not THE Hell, mind you) and its heroes, villains and civilians had to deal with it.

Should not be confused with a part of Dante's The Divine Comedy, the movie about a burning building, or several other media uses of the word "inferno".

Synopsis: Although extended to affect several Marvel titles, this was basically an X-Men crossover. It was made for two reasons: first, to solve the dangling plotline regarding Cyclops' wife, Madelyne Pryor, and secondarily, to finally do something with the plotline of Illyana Rasputin (Colossus' sister) which had been teased for years. Pryor was a Jean Grey lookalike that Cyclops just happened to meet shortly after Jean's death. They married and had a baby. However when Marvel decided to bring Jean back to life and have her and Cyclops star in a new title, X-Factor, suddenly the character was unnecessary and made Cyclops look bad for "running away from his wife". (Actually he had tried to return to her later, but she had vanished by then.) This story revealed that Pryor was a clone of Grey from the start, created by the villain Mister Sinister since he wanted a baby born from the two of them, as it was predicted it would be the only one who could permanently destroy Sinister's archfoe, the mutant villain Apocalypse. The revelation drove Pryor mad.

As for Illyana, she had the mutant power of opening portals to the dimension called Limbo — which was a type of Hell. She was captured by its ruler, the sorcerer Belasco, who raised her for the purpose of sacrificing her to his mysterious gods, but Illyana defeated him - leaving her the ruler of limbo, whether she liked it or not. She joined the New Mutants, but her demonic heritage was a constant latent threat.

The plots become linked by the fact that S'ym, Illyana's main demon servant, made a deal with Pryor in a dream, which she haplessly accepted thinking it would not be binding in the real world - needless to say, it was. This turned her into the evil Goblin Queen. The whole thing was a plan by Limbo's top two demons, S'ym and N'astirh (introduced for this story). (Note that N'astirh was given credit for corrupting Madelyne, which is incorrect, unless it had pretended to be S'ym in the dream.) The two eventually turn on each other.

N'astirh tricked Illyana into releasing the forces of Limbo in New York. Demons invaded the streets and even the city itself turned demonic. While the local superheroes dealt with the resulting chaos, the X-Men and X-Factor had to prevent Madelyne from sacrificing her own baby. Ultimately she dies while trying to kill Jean, and things are restored to normal in New York. Almost as an afterthought, the heroes hunt down Sinister and kill him, though he would return later (as did Madelyne). Illyana seemingly was reverted to an innocent, non-demonic child. Most of the people of New York wrote off the incident as a mass hallucination.

In another example of tying up loose ends, the baby was taken to the future (in another story), growing up to become the mysterious hero Cable.

The story had a sequel in 2009 by the title of X-Infernus featuring the "Darkchylde" Illyana once again. It was also revisited during the massive Secret Wars event in 2015, depicting an Alternate Universe where the Inferno never ended. In 2021, a mini-series set in the Dawn of X continuity will be launched, but only In Name Only, as it will be dealing with actions set from the start of the event.

The scrapped third New Mutants movie would have been based on this storyline.

Tropes in this crossover: