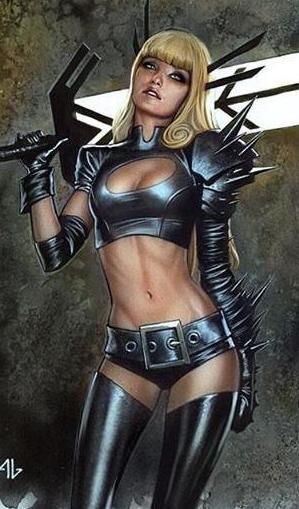 She Used to Be a Sweet Kid.
"Long have you tormented me, you ancient embodiments of evil. My soul was torn from me to purchase your freedom. I have prevented your release many times...but banishment will no longer sate me. You hunger for human fear...human suffering. Today you understand that we are not human. We are superior. Today you cease to be."
—Magik

Illyana Nikolievna Rasputina (typically anglicized to Rasputin) is a Marvel Comics character associated with the superhero teams X-Men and New Mutants. She's first introduced in Giant-Size X-Men #1 (1975). She was created by Chris Claremont and Dave Cockrum. She's also known under the alias Magik. She also has a Superpowered Evil Side known as the Darkchylde, a semi-demonic version of herself corrupted and transformed by dark magic.

Illyana is the baby sister of Piotr Rasputin a.k.a. Colossus, and just like her brother, she is Russian. Illyana was an adorable little girl whose innocence drew the attention of the evil sorcerer Belasco. During a time when she was living with the X-Men, Belasco kidnapped her and made her his apprentice so that she might free his Eldritch Abomination patrons. She spent 7 years in a realm of Hell known as Limbo while only seconds passed on Earth, during which she learned sorcery and discovered her mutant teleportation power. She joined the New Mutants as Magik and served as a member for some time, though the nature of her abilities and Anti-Hero attitude unnerved her more religious teammates. Then, during Inferno, she was de-aged back into a 7 year old and was later killed by the Legacy Virus. Then she later came back as a demon. It's very confusing.

Her former teammate Karma organized another New Mutants team, and placed her in charge of it.

Illyana is set to appear in 2020's The New Mutants, played there by Anya Taylor-Joy.