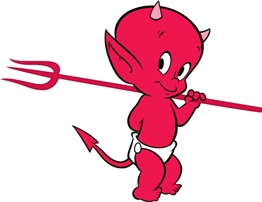 An adorable devil
Hot Stuff the Little Devil is a comic book character created by Warren Kremer who first appeared in Hot Stuff #1 (October 1957), published by Harvey Comics. Imbued with a mischievous personality and able to produce fire, Hot Stuff is friends with Casper the Friendly Ghost. However, he appears only as a supporting character in the Casper books, never having been given a cartoon of his own.

After Casper the Friendly Ghost and Wendy the Good Little Witch, Harvey Comics created another character based on childhood fears and settled on a devil character named Hot Stuff. As with all Harvey kid characters, most of the “bad” characters are merely mischievous at heart, and usually have good intentions, despite being a little bit rascally. Harvey had such high hopes for Hot Stuff, so much so that it didn't even debut as a supporting feature or in the Harvey Hits tryout series before going to its own series. It turned out to be a wise choice since Hot Stuff ranks as one of the most popular characters to come out of Harvey after Casper and Richie Rich.

; however, nothing happened since the announcement.