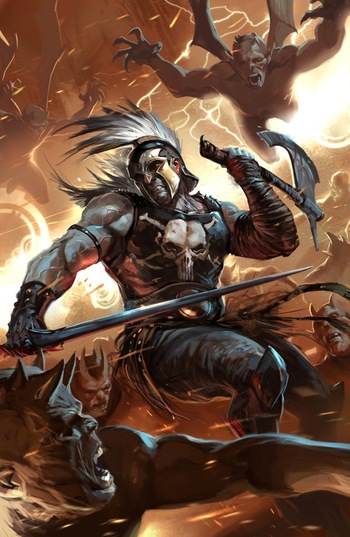 "Ares. My name echoes in the cries of women and children, and is etched with dents in swords. Ares evokes not just the power of war, but something more. The will to do the deeds that others cannot... the rape of nations, the genocide of people, to rejoice in blood and pain. I do not choose a victor; I simply act when one side is willing to do its worst. To unleash the beast of war. For annihilation is the art of Ares, and that is my name."
— Ares, Ares #1

Ares is a Marvel Comics Anti-Hero created by Stan Lee and Jack Kirby in 1966. Based on the Greek god of the same name, Ares made his debut in Thor #126. A villain for decades, the God of War changed his ways after a battle with the forces of Pluto. Summoned to end the stalemate between Pluto's forces and those of Olympus, Ares brutally crushes the enemy army almost single-handedly. Returning to Olympus, where he believes he will be welcomed for the first time, Ares overhears a conversation between his fellow gods that cuts to the bone. Considered to be nothing more than a brutal killer by his own family, Ares realizes that he'll never be welcome in Olympus. Disappointed, Ares leaves his life as the God of War behind and settles on Earth with his son, Alexander. To ensure that his son has a normal life, Ares never tells Alexander of his godly heritage.

Now John Aaron, a simple carpenter, Ares and his son live on Earth for years until the unexpected arrival of the messenger Hermes. Ares learns that Olympus is threatened by Amatsu Mikaboshi, the Japanese god of Evil, but he refuses to offer his help. Desperate, Zeus kidnaps Alexander, which forces Ares to abandon his life as John Aaron and become the God of War once more. Returning to Olympus, Ares is further dismayed when he learns from the Greek hero Achilles that the Olympians lost Alexander to Mikaboshi's forces. With his son in the hands of the enemy, Ares joins the Olympians in battle until he is confronted by an unexpected enemy: Alexander, the Eastern God of War. After a short, brutal battle in which Ares cannot win, Zeus uses his power to convince the Eastern war god to betray Mikaboshi, which, combined with an attack from other Eastern gods, ends the war in favor of the Olympians. Reunited with Alexander, who learned the truth of his heritage from the god of evil, Ares returns to Earth to resume his life as a carpenter... or so he thought.

Not long after the Civil War ended, Tony Stark realized that the world needed an Avengers team once more. Citing the need for a "Thor/Wolverine", basically a god-level being willing to kill, Stark pressed team leader Ms. Marvel into offering Ares a spot on the new Mighty Avengers. When Iron Man and Ms. Marvel visit Ares at a construction site, effectively blowing his cover, the God of War has no choice but to accept, though he makes Tony match his construction pay ($44/hour, apparently). As a member of the Mighty Avengers, Ares fulfills the role of The Big Guy along with The Sentry.

He was killed off by The Sentry during Siege, but will be making his return in the Contest of Champions series.

Not to be confused with DC Comics' Ares, who is Wonder Woman's grandfather and Arch-Enemy.