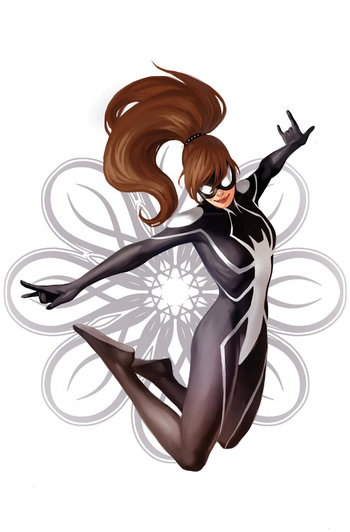 Anya Corazón, also known under the alias Spider-Girl and formerly Araña, is a Marvel Comics superheroine. She's introduced into Marvel Universe in Amazing Fantasy Vol. 2 #1 (August 2004) and is created by Fiona Avery and Mark Brooks.

She was amongst the Pro-Registration heroes in the Civil War, acting as Ms. Marvel's Tagalong Kid, and while questioning her worst moments, she continued to be on Carol's side, the two helping each other out, despite her father's misgivings. Carol once saved her from the mind control of Puppet Master, solidifying their relations.

Like the rest of the Spider-Family, she wasn't heard from any more until Grim Hunt, where luckily for her, Araña managed to survive the events and helped Spider-Man defeat Kraven. In the aftermath, she was handpicked by Julia Carpenter as the successor of the Arachne suit and becomes Spider-Girl as Julia succeeds the late Madame Web.

Anya later becomes part of the new class of students when the Avengers Academy moves to the former headquarters of the West Coast Avengers, though she later returned to New York, becoming Spider-Woman's pupil, and played a key role in Spider-Verse. In the aftermath of the conflict, she choose to accompany Spider-UK (Billy Braddock), whose reality had been destroyed by an Incursion, to stay in the Loomworld, the Inheritors' former base, and form the "Warriors of the Great Web", in order use the Web of Life and Destiny to reach out any universe in need of a Spider-Man. Anya returns to prominence as a member of the multiversal Web Warriors team, as part of the All-New, All-Different Marvel initiative.