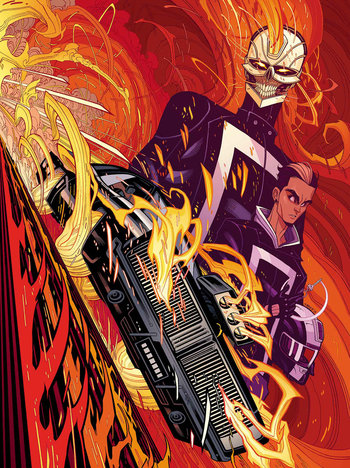 Drive ANGRy
This is the tale of an ordinary kid named Robbie Reyes, whose life is about to become a hell of a lot less ordinary. Get in. LET'S RIDE.
Advertisement:

Robbie Reyes was an ordinary teen living with and taking care of his younger brother Gabe in the rougher part of East Los Angeles while also working part-time as a mechanic. After a particularly dangerous stint with a client's car, just before he loses his life, he's reborn with a body of bones and a head aflame, becoming the Ghost Rider.

Written by Felipe Smith and initially drawn by Tradd Moore, All-New Ghost Rider began in 2014 and ran for twelve issues, ending because of declining sales and the departure of Moore from its creative team.

Following the conclusion of ANGR, Robbie returned for the Secret Wars tie-in limited series Ghost Racers, which saw him competing against his fellow Ghost Riders in deadly races held within the capitol of Battleworld.

As part of 2016's Marvel NOW, relaunch, Robbie received a new limited series —simply titled Ghost Rider— with Smith as its writer, Danilo Beyruth on art, and Moore providing back-up stories. He later appeared in the 2017 Marvel Legacy one-shot, teasing his later membership as an Avenger a year later.

Outside of comics, Robbie joined the cast of ABC's Marvel Cinematic Universe-set Agents of S.H.I.E.L.D. — portrayed there by Gabriel Luna — for its fourth season, playing a major role in its "Ghost Rider" arc. In May 2019, it was announced that Luna would reprise the role for his own Ghost Rider series on Hulu the following year. However, it was announced months later that the series would not be going forwards due to creative differences