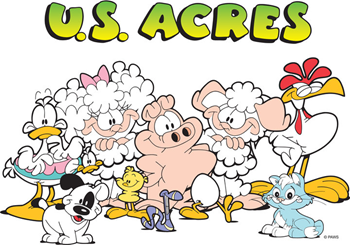 U.S. Acres was a short-lived comic strip created by Jim Davis, far better known for his role as the creator of Garfield, and assisted by Brett Koth. The strip focused on a cast of talking animals who lived together on an unnamed farm:

The strip, begun in March 1986, was not a success (especially compared to Garfield), and it came to an end just three years and one month later in April 1989. As a result, U.S. Acres and its cast are much better-known in animated form, due to appearing in Garfield and Friends. There, it existed for seven years as the "B" in that series's A-B-A format – that's right, the animated version lasted more than twice as long as the strip did!

, though it's been abandoned since 2017 and links to the now defunct Gocomics archive.

The characters also appeared in the Android and iOS Garfield's Defense' games to help said title character against food aliens and zombies. Predictably they have also made the occasional cameo in Garfield's own comic strip.

Known as Orson's Farm outside the US and on the Garfield and Friends DVD set, since the versions used are international instead of domestic. The strip is also referenced as such on the "Professor Garfield" children's educational website.

The Viacom acquisition in August 2019 led to the rights to U.S. Acres transferring to them along with Garfield. While a new Garfield show was announced almost immediately, there is currently no indication of any new developments on U.S. Acres aside from the regular acknowledgement of it as Paws, Inc's only other IP. While Paws, Inc. hosted a complete archive of the strip on the official Garfield website for years, in June 2020 the entire Garfield website was shut down and took the entire comic archive with it. With the books long out of print and selling for hundreds of dollars, the comic is almost completely out of reach of casual readers now. It's unknown if Viacom intends to find a new host for the archive or reprint the strips in some form.

Tropes present in the strip: