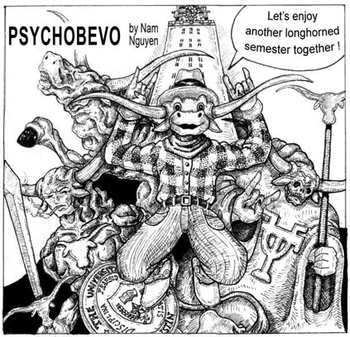 A comic strip by Nam Nguyen for the campus newspaper The Daily Texan, Psychobevo parodies the University of Texas' already-fanatical school spirit Up to Eleven. In the comic's universe, UT's longhorn steer mascot Bevo exists in two incarnations: one a terrifying demigod that devours anything in sight, the other an Ax-Crazy psycho killer. Both work in unison to terrorize the campus with massive amounts of meticulously-drawn violence. If students appear, they're usually about to be slaughtered.

Although there isn't usually an obvious plot or continuity, the topics in each strip tend to line up with current events at the university (nightmarishly exaggerated, of course). High-profile football games are portrayed as epically violent affairs, and Student Government elections are loaded with conspiracy. But none of these things can compare to the simple horror of seeing a beloved mascot turned into a world-destroying abomination. Once you get a dose of Psychobevo, you'll never look at burnt orange the same way again.