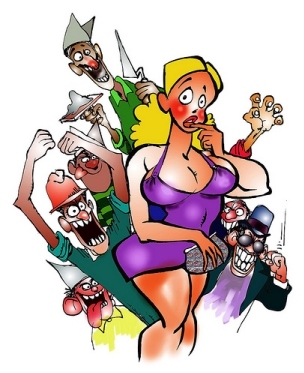 A typical day on Palomita's life.
Palomita was a very popular Chilean comic strip created by the late cartoonist Eduardo de La Barra. It was published in the Chilean daily tabloid "La Cuarta" from November 13th (1984) until November 28th (2013)

The strip was famous for it's ingenious mix of quick jokes, chained puns and satirical humor (De La Barra's trademarked style) but mostly for the generous amount of nudity displayed at a regular basis, always presented in a way that avoided any kind of vulgarity.

The strip’s main protagonist is a sexy, well meaning and naïve (but not stupid) 22-year old blonde girl nicknamed “Palomita” (Little Dove) and revolved around her daily escapades involving her liberal lifestyle and the troubles it used to cause her at her job, or with her relationship with boyfriends, lovers and neighbors alike, as she liked to practice free love and nudism, while her natural naivety used to get the best out of her half of time.

Every Saturday, the newspaper included a fun and games supplement called “Hachita y Cuarta” featuring puzzles, games, trivia and short comics, which included a longer Palomita story. During that day, she didn’t appeared in her usual newspaper’s strip.

The co-protagonist was Palomita’s skinny guardian dog, named “Platón” (Plato) who’s comments and reactions to his owner’s lifestyle made the core for the strip’s punchlines. Platón also used to take over the comic strip every Saturday while his master’s adventures were displayed in the “Hachita y Cuarta” supplement.His solo strips were exclusively about political humor and gave him a cat partner, where both animals commented the world's and their country’s current politic issues.

Eduardo De La Barra died on November 10th of 2013 at the age of 71, after a long battle with cancer. Two weeks later, his comic strip was removed from the newspaper.