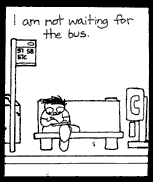 is a comic strip by Jason Shiga. It's the story of a security guard who meets someone he didn't expect at a bus stop, whose significance he only realizes after he leaves. He then becomes obsessed with finding her again.

When his amateur sleuthing fails, he resorts to waiting at the bus stop for hours every day. To pass time while waiting, he draws comic strips to journal his progress.

Bus Stop was originally published in the San Francisco Examiner, but was cancelled when the paper changed ownership. The complete story was published on Jason Shiga's website, but was unfortunately taken down when the site was redesigned.