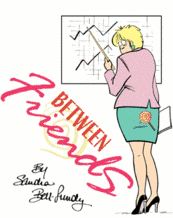 Between Friends is an internationally syndicated comic strip written by Canadian cartoonist Sandra Bell-Lundy. The comic strips appear in more than 175 newspapers in 10 countries around the world. Three middle-aged professional women and the problems that they face in their lives are the main focus throughout the comic strip series. Initially, Maeve, Susan, and Kimberly were all childless, but Susan and Kimberly are now mothers.