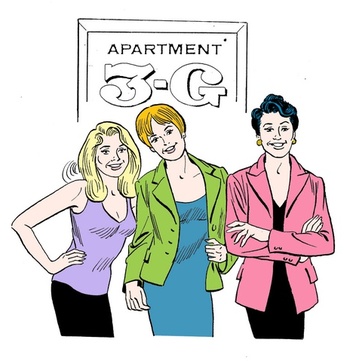 Left to right - Lu Ann, Tommie and Margo.
Apartment 3-G was a newspaper comic about three women living in the same apartment in Manhattan. They were the brassy and aggressive Margo Magee, the sunny and innocent war widow Lu Ann Powers, and the quiet and hardworking nurse Abigail "Tommie" Thompson.
Advertisement:

Created by Nicholas P. Dallis in 1961, the strip ceased publication in November 2015. During its final years, it was written by Six Chix cartoonist Margaret Shulock and drawn by Frank Bolle.