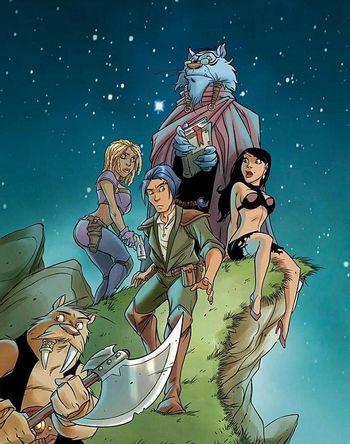 In the center, from left to right: Granite, Narvath, Callista.
Advertisement:

Les Naufragés d'Ythaq ("The Castaways of Ythaq"; released in English as Ythaq) is a long-running French comic book series created in 2005 by writer Christophe Arleston (of Lanfeust fame) and artist Adrien Floch that blends elements of Space Opera and High Fantasy. 17 albums have been published so far.

Granite Welgoat and Narvarth Bodyssey work onboard the Brume de Comète, a luxury space cruiser, in which Callista De Sargamore is a passenger. The spaceship crashes on an unknown planet and the three of them find themselves in the same lifepod.

After landing on the planet, they realize it is populated by several different sentient species, including humans. It turns out that a number of other ships have known a similar fate over the years, and their shipwrecked crews and passengers have assimilated into native societies. Some of them have developed the ability to master one of the four elements; Granite herself discovers that she has acquired pyrokinesis.

Gradually, the big picture emerges. The planet is the setting of a live-action game that has been played for centuries by the greatest powers in the galaxy, under the supervision of mysterious entities.