Comic Book / Wolverine and the X-Men (Marvel Comics)
aka: Wolverine And The X Men 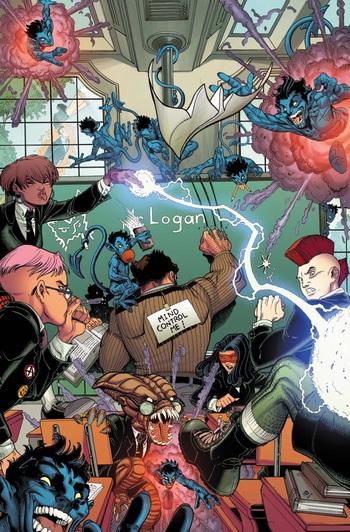 Welcome to the Jean Grey School for Higher Learning
Advertisement:

After the events of Schism tore Wolverine and Cyclops apart, Wolverine left the mutant island of Utopia to return to the ruins of the school in Westchester. Taking several of the X-Men with him to act as teachers for new students, Wolverine rebuilt the school, with himself and Kitty Pryde as the heads. He named it The Jean Grey School for Higher Learning, as both a homage to (the yet again deceased) Jean Grey as well as a huge middle finger to Scott Summers.

The series switches between a focus on a handful of the teachers (Wolverine, Kitty Pryde, Beast, Iceman, Rachel Grey, later Storm) and the students. The main cast of students includes:

Joining after Avengers vs. X-Men:

Kade Killgore, a psychopathic 12 year old, leads the newly revitalized Hellfire Club (who are also largely children), and is the main villain of the series. Basically everything that happens ever is his fault (with the exception of Avengers vs. X-Men).

The first series ended, replaced by a new series with the same name in March of 2014. The second series ended in December 2014 and relaunched as Spider-Man and the X-Men, in which Peter Parker is asked to join the Jean Grey School as councilor as one of Wolverine's last wishes following his death.

Not to be confused with the TV series based on the X-Men franchise.

The 2011 series provides examples of:

The 2014 series provides examples of: