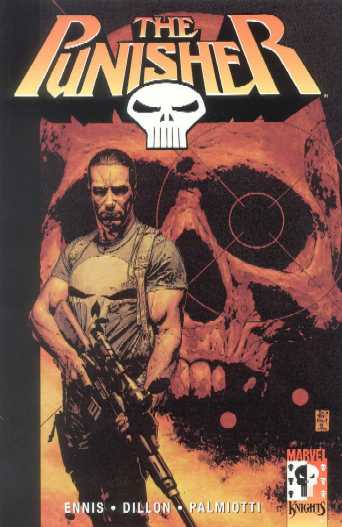 Welcome Back, Frank is a story arc by Garth Ennis and Steve Dillon, with the long awaited return of The Punisher.

Punisher is back in town, ready to end the criminal family of Ma Gnucci once and for all. But first, to make things easier, he killed several of her hitmen, including her sons. She gets more and more hitmen, and eventually they trapped him without weapons at the local zoo. Still, he manages to use the animals to his advantage and kill people for him. He left Ma Gnucci with the polar bears, but she survived. Armless and legless, but she survived. He retreated for some days to the hotel (where he uses the alias "John Smith") until he heals and can go into action again. One of his neighbours noticed that it was him, and outed his identity to Ma Gnucci in exchange of a reward. The criminal attacked him and hurt him, but he was saved by his other wacky neighbors, Spacker Dave and Joan the Mouse.

Needing more power to finish the job, Ma Gnucci called The Russian, who attacked Castle as well. Punisher killed him, returned to the mansion of Ma Gnucci, killed all her remaining henchmen, and set the building on fire, with the crippled Ma Gnucci still inside.

Oh, and don't forget about Soap. The police does not want to move a finger against Punisher, who saves them so much work, but they have to. So, they assigned the "Punisher case" to the most pathetic couple of losers they could find.

Punisher's return also inspired three other vigilantes, "The Holy", "Elite" and "Mr. Payback". Punisher killed all of them.

Welcome Back Frank contains examples of: