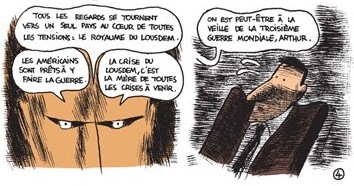 Weapons of Mass Diplomacy (French: Quai d'Orsay) is a Franco-Belgian comic book by Christophe Blain and Abel Lanzac. Based on Lanzac's (later revealed to be a pseudonym for French diplomat Antonin Baudry) personal recollections of his career at the French Ministry of Foreign Affairs (usually referred to as the Quai d'Orsay since that's where its main offices are located), it tells the story of Arthur Vlaminck, a young and impressionable university graduate who gets hired by the minister as a "language expert" — a fancy term for speechwriter.

Vlaminck discovers from the inside the workings of the foreign ministry: the bureaucratic wheelings and dealings, the petty personal rivalries, the high-stakes crisis management, and looming over the whole thing, the driven, charismatic figure of the minister himself, Alexandre Taillard de Vorms, a transparent alter ego of Dominique de Villepin. Vorms's overriding concern is preventing the American invasion of a certain Middle Eastern country.

The French Minister, a film adaptation, was released in November 2013.