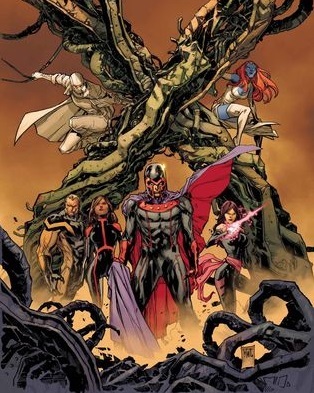 In the wake of Secret Wars (2015), a new series of Uncanny X-Men began as part of the All-New, All-Different Marvel initiative, written by Cullen Bunn, with art primarily by Greg Land and Ken Lashley. The series featured a darker roster of characters doing what they have to when mutants once again become an endangered species. The roster included Magneto, Psylocke, Sabretooth (still inverted from AXIS), M, Archangel, Mystique and Fantomex.

Notably, this is the first time the Uncanny X-Men series was definitively not considered the flagship X-Men series, which was Extraordinary X-Men.

The series ended after 19 issues to begin ResurrXion.

The fourth volume provides examples of the following tropes: