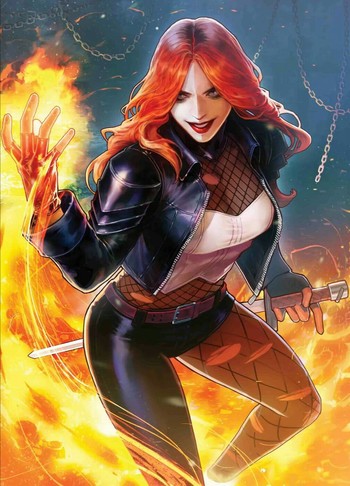 Suffering from dissociative identity disorder that manifests as three distinct personalities note the pacifist "Mary", the ruthless "Typhoid", and the murderous "Bloody Mary", Mary is a professional assassin whose services have been utilized by the likes of The Kingpin and Doctor Doom. Dangerous enough from extensive martial arts training, her mutant abilities —which include super reflexes, telekinesis, pyrokinesis, and limited telepathy— also make her a force to be reckoned with.

While most frequently associated as being a part of ex-lover Daredevil's rogues gallery, she's also tangled with Spider-Man, Deadpool, and the X-Men. For a brief period, she joined the Avengers' Initiative as Mutant X as a means of containing her more violent sides, but it only lasted for so long.

Mary has appeared in other media, most notably the second season of Iron Fist, as portrayed by Alice Eve. This version of the character, a former PoW whose time in Sokovia triggered the split, notably lacks her mutations and backstory with Daredevil. She also appeared in the 2003 Elektra movie as a secondary antagonist, portrayed by Natassia Malthe.