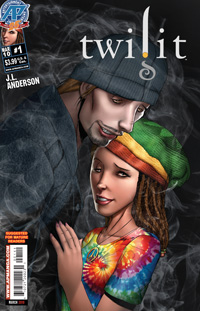 Who knew vampires can get high?

Twilit is a 2010 Antarctic Press comic by J.L. Anderson that parodies the Twilight series.

The comic focuses on Maverick Dreadnyght, a vampire prince who could really care less about his species "ancient ways" and would rather spend all day getting high. However his father is insistent on him following in his footsteps and their family legacy. After Maverick is caught trying to sneak off to Burning Man, he's punished by being sent to a vampire academy where he has to deal with a pompous roommate and flack from his teachers. Luckily he still has his weed...till it eventually all runs out and things get complicated from there.

The comic is recently on hiatus though J.L has stated she wishes to return to it when she has the time and resources.