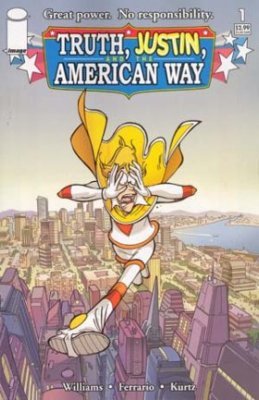 Truth, Justin and the American Way is a 2005-2006 5 issue comic book published by Image written by Aaron Williams and Scott Kurtz and drawn by Guisppe Ferriaro. It was made out of a desire to make a comic based on an old '80s series without having to get the rights to one.

Set in The '80s, the story is set up as a sitcom from the era and follows the adventures of Justin Cannel, a 20-something washout on the precipice of getting married to Bailey, the girl of his dreams who just wishes he'd grow up a bit. Meanwhile Agent McGee of the FBI is after an alien battle suit that looks like a disco-ey superhero costume and after capturing the Russian agent holding the suit, he finds a shirt-reading bachelor. Naturally, Justin gets the suit and finds himself with the ability to do anything... and McGee, mistaking our hapless hero for a Communist spy and refusing to see the obvious truth, is right on his tail. Now Justin must duck the feds, figure out his new suit, and keep his blushing bride-to-be from breaking up with him. Hilarity Ensues.

Truth, Justin and the American Way provides examples of: