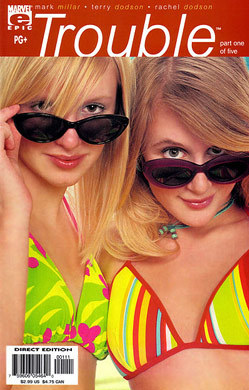 Trouble is a story set in the Marvel Comics universe, published in 2003 by their Epic Comics imprint.

The five-issue series follows the adventures of brothers Ben and Richie, and best friends May and Mary. The four, along with numerous other youths, meet at a resort during summer work and hook up, Ben with May and Richie with Mary. However, their sexual misadventures end up taking more dramatic turns that change their lives forever when the negative effects of such a lifestyle begin to catch up to them.

What makes Trouble particularly infamous is that it was apparently meant to be a prequel to the Spider-Man universe; Ben and May are Peter Parker's uncle and aunt, and Richie and Mary are his parents. The premise and subsequent plot reveals about Spider-Man's family resulted in it being widely unaccepted and ignored by fans and creators alike.