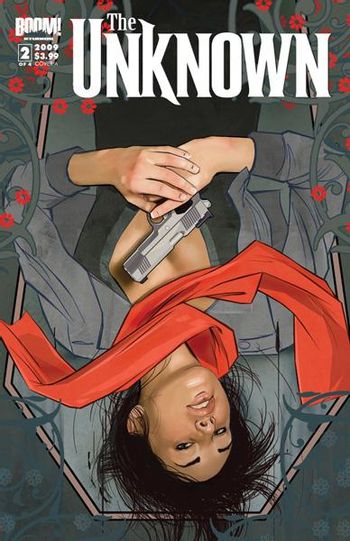 It's a story that's part classic chase, part detective, part speculative science, part metaphysical, part crime drama, part buddy flick, and oh, hell, let's just throw in the damn kitchen sink while we're at it and God knows how he did it but it all works.
— Gail Simone's introduction to the first trade paperback
Advertisement:

Catherine Allingham is the smartest detective in the world. She is also dying of a brain tumor and has six months to live. The way she copes with this? Solve the biggest mystery of them all: what happens to us after we die?

Joined by her ex-bouncer bodyguard James Doyle, she travels across the world searching for the elusive truth and delving deeper and deeper in the world of mystery and the macabre.

A Mind Screw comic book by Mark Waid. A second mini-series came out in 2011 called The Unknown: The Devil Made Flesh.

Tropes used in this comic series: