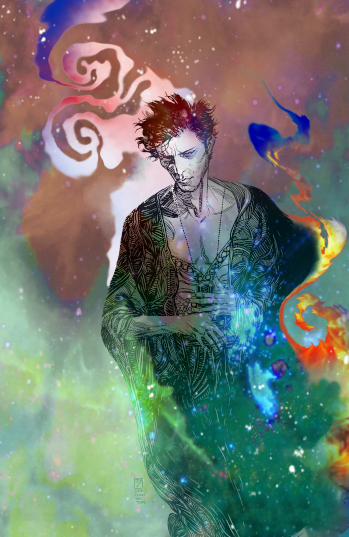 The Sandman is a Comic Book series by Neil Gaiman, chronicling the story of the King of Dreams and his family of fantastic Anthropomorphic Personifications of cosmic powers. Described as "a story about stories," The Sandman was a comic series that could tell any tale, in any time period, in any style or setting. Historical figures were common, as were allusions and homages to many classic works of fiction, such as the Arabian Nights and the plays of William Shakespeare. The series lasted for 75 issues, from January 1989 to March 1996, with a one-shot special in November, 1991. A prequel mini-series, The Sandman: Overture, was released in 2013, the original series' 25th anniversary, and was written by Gaiman with art by J H Williams III.

At the center of the series is Dream, also known as Morpheus, the Sandman, and dozens of other titles. He rules over the dreaming world that mortals enter when they sleep, and he is also the patron of writers and storytellers (described as "The lord of all that is not, and shall never be."), since a story and a dream are in many ways the same thing. As old as the universe and more powerful than many gods, Dream is vain, proud, and stiff-necked. Throughout the series, tragedy and suffering teach him humility and compassion for others, but it's hard to change for the better when you're billions of years old and very set in your ways...

Like many experimental comic book series of its era (like Alan Moore's Swamp Thing and Grant Morrison's Animal Man), The Sandman is ostensibly a reboot/revival of a third-string character from DC's early days, whom Gaiman was given free license to play with as much as he wanted. Hence, the series' name is taken from a detective series created by Gardner Fox in the 1930s, which followed the adventures of a gas-masked private detective who put criminals to sleep with anaesthetic gas. But while most of Gaiman's contemporaries at least kept the general premise of the characters that they were working with, Gaiman essentially just took the name and ran with it. The original Sandman is given a token mention in the first issue, and Dream often wears a helmet that resembles a gas mask — but other than that, the story is wholly original.

The series attracted a huge number of fans from groups who aren't traditionally seen as readers of comics, most notably young women. By the end of its run, it was selling better than Superman, had attained heaps of critical praise and industry awards, and became the first and only comic book to win the prestigious World Fantasy Award for Short Fiction. The oft-told story that the rules were changed to make comics totally ineligible after The Sandman's win is false; they were merely barred from competing in the Short Fiction category. Comics have since been nominated under the Special Award Professional category.

In 2018, it was announced that a line of shared universe Sandman comics would begin as part of The Sandman's 30th anniversary, called The Sandman Universe. Though not writing any of the new titles himself, Gaiman serves as a creative consultant, and helped select each of their creative teams. Despite Vertigo's eventual retirement as an imprint in 2019, it was confirmed that the Sandman Universe will continue to run as DC titles.

Adaptations of the comic and other media based on it include: