Comic Book / The Others 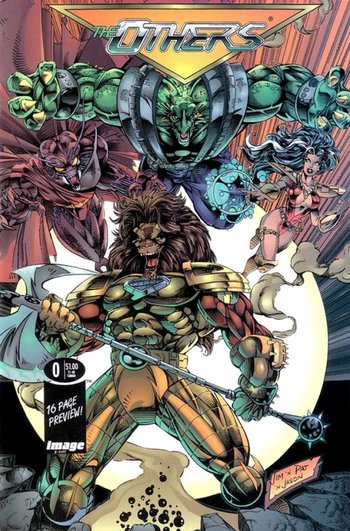 The Others is a short-lived (3 issues, with a 14-page "preview" Issue #0) comic book series by Image Comics, which was published in 1995. The characters and setting first debuted in issue #15 of the 1995 Shadow Hawk run.

The titular superhero team "The Others" are the chosen guards of the Enclave, a paradise-like hidden civilization buried under Antarctica that is the last refuge of the Many - a collective of humanoid races who descended from non-primate animals at the dawn of time, who ultimately fled to Antarctica in order to escape from a human race hellbent on exterminating them. Despite centuries of peace, they have never forgotten humanity's crimes against them, and have lived in paranoid fear; thus, the Others - Guardd, Rebound, Racket and Klone - are gifted with super-advanced technological devices and charged with protecting their people from humanity's attack.

When Shadowhawk arrives as part of his quest to find a cure for his AIDS, the treacherous Lord Mongrel attempts to ignite a civil war. Though this causes Shadowhawk to leave rather than disrupt the Enclave with his presence, the Enclave receives no respite; human helicopters approach the Enclave's hiding place, and the scheming Thrall uses his Psychic Powers to manipulate King Skyglider into sending the Others to turn back the supposed-invasion.

On the surface, the Others bring down the helicopters, resulting in the accidental death of the squad's sergeant, and then resolve to take the survivors to the Enclave for medical treatment and to decide what to do with them. Unfortunately, Mongrel's minions intercept them and fight them to a defeat, locking them in a dungeon, whilst Thrall's psychic poison leaves King Skyglider bedridden, allowing Lord Mongrel to take his place as acting ruler and start preparing for war against the human race.

Escaping from the dungeon, the Others attempt to stop Mongrel, but whilst they defeat his minions, Mongrel uses their stolen weapons to battle them almost to a standstill. Only when the human Jayson Rife, at this point the last of the humans alive in the city, escapes and comes to their aide with his own super-weapons does the tide of battle turn. During a brief lull, King Skyglider staggers to the balcony of his palace and publicly calls out to the Many, telling them that peace is the only possible path with humanity and castigating Mongrel as a traitor to the crown. For this, Mongrel uses his stolen Sonic Blasters to destroy the balcony, sending the mind-poisoned Skyglider tumbling to his death.

This sight drives Klone wild with rage and grief, and he attacks Mongrel in a frenzy, pounding on him with such savagery and strength that he manages to overload his forcefield and leave him in an unconscious heap on the ground. Seeing the way things are going, the treacherous Thrall attempts to escape, but is intercepted by his fellow serpents, who proceed to bite him to death for his crimes and the shame he has brought on his people. The Others soon overwhelm the last of Mongrel's minions, and the civil war is crushed.

Jayson contacts his senator father, informing him to call off any military plans he had intended on directing against the Enclave, explaining that he intends to promote peace between the Many and humanity. King Skyglider is buried with full honors and his will read, which includes naming the Others as envoys to the world of man and a request for Kontact to become an official member of the Others. Finally, it asks that the Many try to finally welcome Klone and accept him as one of them.

Sadly, like most other Image titles, it succumbed to the Image curse and was Cut Short. The story ends at that point and was never picked up again.