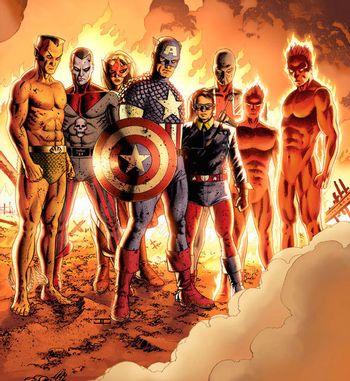 The Invaders is a Marvel Comics series about a team of superheroes that fought against the original Axis of Evil during World War II. The team originally consisted of Captain America and Bucky, Jim Hammond/the Original Human Torch and his sidekick Toro, and Namor the Sub-Mariner. They first appeared in The Avengers in The '60s, debuting in #71 (December, 1969). They were co-created by Roy Thomas, Sal Buscema, Bill Finger, and Martin Goodman. They later gained their own comic book series in 1975. The original series lasted for 41 issues (August, 1975-September, 1979). It was followed by a miniseries of the same name which lasted for 4 issues (May-August, 1993).

A newer series was published in the early 2000s, in which several of the surviving Invaders came out of retirement and joined up with some new members to fight terrorists inspired by their old enemies. This series was called New Invaders and lasted for 10 issues, including #0 (August, 2004-June, 2005).

Not to be confused with the TV show The Invaders or the comic book series of the same name made by DC Comics.