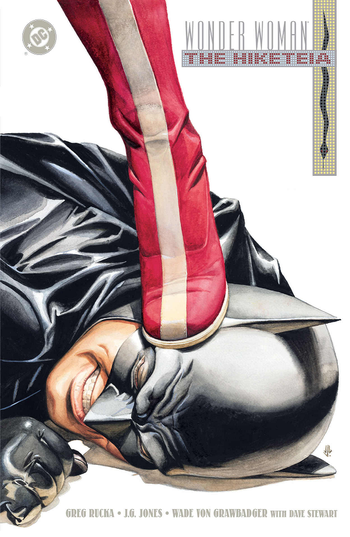 Wonder Woman: The Hiketeia, first published in 2002, is a one-shot graphic novel by writer Greg Rucka note  His first work on the character and artist J.G. Jones. When a young woman called Danielle "Danny" Wellys comes to Wonder Woman's doorstep and invokes the ancient ritual of the Hiketeia, Diana finds herself honor-bound to eternally protect and care for her by the ancient tradition. Watched over and warned by The Erinyes note  a.k.a The Furies of Classical Mythology should she fail to uphold the ritual, Diana soon finds herself in a no-win scenario as her oath and sense of compassion brings her into conflict with Batman, who looks to bring Danielle to justice over the events that brought her to Diana in the first place.

Greg Rucka would soon go one to write the main Wonder Woman book in the following year.

This Storyline provide these examples: