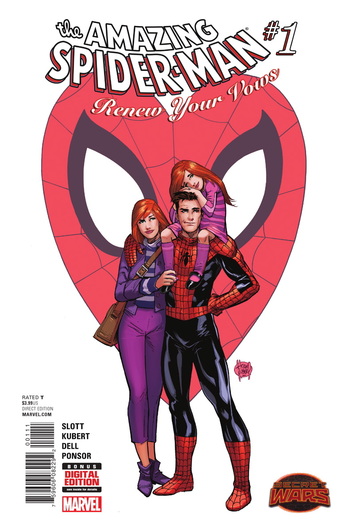 One More Day? Not today!
"I can do this! I can keep you safe — without compromise. In this moment, I renew my greatest vow."
Advertisement:

The Amazing Spider-Man: Renew Your Vows is a Spider-Man comic book set on Earth-18119, which was first introduced as a Battleworld formed during Secret Wars (2015).

The original five-issue miniseries follows the story of how a super villain known as Regent managed to assimilate the superpowers of the majority of Earth's heroes and villains. He turns the entire world in an Orwellian dystopia with the intention of hunting down all the remaining superheroes, but especially Spider-Man, whose Spider-Sense is the power he wants the most. This forces Peter Parker and Mary Jane, who are still happily married in this universe, to live in hiding for eight years... alongside their daughter, Anna-May "Annie" Parker, who has started to develop her own spider-powers. This miniseries was written by Dan Slott and drawn by Adam Kubert.

After the conclusion of Secret Wars (2015), these versions of the characters disappeared until the series was continued in January 2017 as an ongoing under Marvel NOW! (2016). Taking place after the events of the original mini-series, Peter has now developed a suit from Regent's technology that allows him to share his powers with Mary Jane. Meanwhile, Annie has started to gain full control of her own abilities, but find herself secretly learning new ones as well. From this point forward, the series focuses on the Parkers as a Super Family Team, with MJ and Annie adopting the names of Spinneret and Spiderling, respectively. This run was initially written by Gerry Conway note The writer who elevated Mary Jane Watson as Peter's true soulmate, albeit Conway was never on board with marrying them in the regular continuity, with artist Ryan Stegman stepping up to take the role when Conway started fighting with editors during the comic's Venom arc. The Renew Your Vows characters made appearances outside the book in Venomverse.

Following the Marvel Legacy branding in late 2017, the comic gained a new writer in Jody Houser from issue 13 onward. This was concurrent with the series undergoing an eight-year Time Skip, with Annie now being a teenager wishing to prove herself as a hero outside her parents' constant supervision. The comic would come to end the following year with Issue #23. Both Christos Gage's Spider-Geddon and the tie-in Spider-Girls miniseries (written by Houser) served as a coda for the series. It would not, however, be the last time readers would see the Spider-Family, as they would cameo in Marvel Comics#1002. Annie would go on to play a significant role in the 2022-2023 End of Spider-Verse' event, with her co-creator Dan Slott returning to write this latest ordeal.