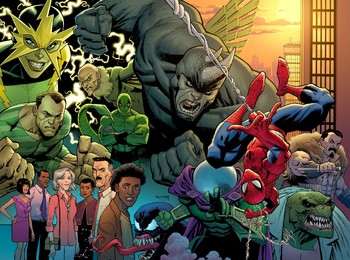 Back to basics.
And yeah, I know I'll end up regretting this. But as I sat there looking at Boomerang, all I could think about was myself and the people I'd let down so much lately. How so many of them had forgiven me — even given me opportunities to set things rights. If they could do that, why can't I? Bottom line — we all need second chances sometimes.
— Peter Parker, TASM Vol 5 #7
Advertisement:

Launched as part of the Marvel: A Fresh Start initiative after a historic ten years. Dan Slott's massive Spider-Man run has finally come to an end. Who could fill in for such large web-shooters? Let's start with Nick Spencer, who gave us the criminally-underrated Superior Foes of Spider-Man. The run revisits a substantial amount of the wall-crawler's history while continuing and revising story elements from more recent years. Marvel's official stance is that it also the Grand Finale to the decade long saga brought about by the infamous One More Day

Peter Parker is not having a good day. After climbing out of the hole that came out from the destruction of Parker Industries, he's been knocked down again as it's been exposed that a paper Otto wrote in his body was plagiarized (as it happens from Otto's own thesis), his Aunt May is angry with him for not admitting that he did such a thing and the hero community is angry with him because Mayor Wilson Fisk is showering support for him and not the rest of them. All in all, a typical case of Parker Luck. That, or the mysterious maggot-infested villain who knows so much about Peter lurking in the shadows.

There are a number of series that are spinning out of this run as well. The first is Black Cat, which sees Felicia doing what she does best while dealing with the Thieves Guild, and The Amazing Mary Jane, which sends Mary Jane to Hollywood to rekindle her acting career.It was eventually announced Nick Spencer would end his run on the book in September 2021, concluding with the Sinister War storyline.

This run was followed by Spider-Man Beyond, which places Ben Reilly as the Spider-Man leading the title for the first time since the days of The Clone Saga.

Examples of Tropes in this storyline: