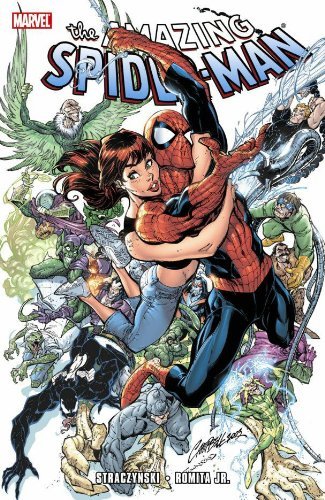 Spider-Man, created in the Silver Age by Stan Lee has been written by various writers over the years. One of them was J. Michael Straczynski, who wrote over seventy issues of our favorite wall-crawler's adventures. His run was one of the most acclaimed by critics, controversial among fans and... screwed by Executive Meddling in the history of Marvel Comics publishing, despite the fact that Joe Quesada promised JMS very large creative freedom at the beginning.

This run, along with Ultimate Spider-Man, helped remake Spider-Man into one of the flagship characters of Marvel Comics in the early 2000s after the confusing and turbulent storylines of the mid-to-late '90s. Until confusing and turbulent storylines overtook the title again... Roughly about half of the complete run was a retool of the traditional Spider-Man mythos and character dynamics, the other half being ever more outlandish crossover events between other titles, and gigantic wrestling matches between "new and edgy" plot developments and the status quo of earlier.

Notable concepts brought about during the JMS run include: Spider-Man's (and many of his rogues') animal motif having potential supernatural origins, Spider-Man as a permanent and visible member of the Avengers (really a case of Brian Michael Bendis' New Avengers title bleeding over), organic web-shooters (to link up with the Sam Raimi films), "Iron Spider", and the public reveal of Spider-Man being Peter Parker.

Followed by One More Day and Brand New Day. Elements of this run also featured throughout The Amazing Spider-Man (Nick Spencer). Also in 2002, JMS and the team won an Eisner Award for Best Serialised Story in honour of #30-35, “Coming Home”.