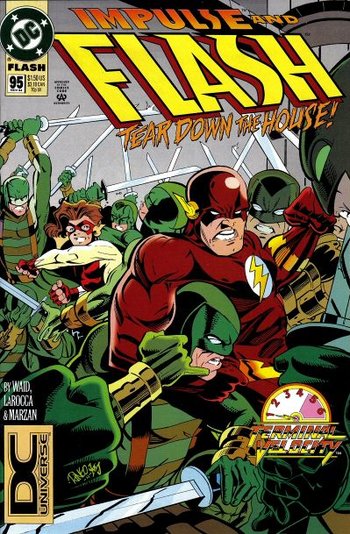 May the Speed Force be with you.
Advertisement:

"Terminal Velocity" is a storyline in The Flash that ran from The Flash vol. 2 #95-100, with #0 leading into it. After tumbling through time, the Flash (Wally West) catches a glimpse of his future. Returning to the present, Wally starts to actively slow down in his crime-fighting, while also taking in his cousin Impulse (Bart Allen, Barry's grandson) as a protégé. Why Wally is doing this and why he's keeping secrets is gradually revealed, as the evil cult Kobra returns to Keystone City.

The story is notable for the introduction of the Speed Force in issue 100. The Speed Force would go on to become a large presence in The Flash, and would be present in all subsequent adaptations of the franchise. After this story, Impulse would also receive his own solo series.

In addition to the usual Flash tropes, "Terminal Velocity" provides examples of: