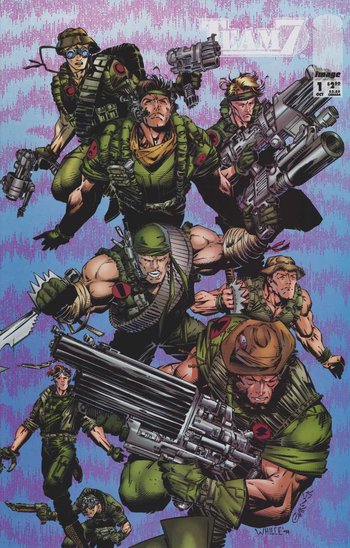 The Squad of WildStorm Universe

Team 7 is a comic book series by WildStorm created in The '90s about a paramilitary group sent by the Intelligence Operations (also known by the initials I/O) to destroy dictatorial governments and possible US menaces during The '70s. Then they were sent into a Suicide Mission where they were exposed to the "Gen Factor", a radioactive experiment that give them superpowers and convert them into metahumans. The surviving members of the team (that didn't die, go mad or get Driven to Suicide as a result of the Gen Factor) deserted from I/O and went undercover, being chased in a couple of times. They reunited a couple of times before they split up going every man by its own.

The title was fundamental to the beginning of the WildStorm Universe, the title being a kind of prequel for the various teams in the WildStorm Universe. Various surviving members of Team 7 either founded or joined teams, with some of their children being born metahumans and forming their own. The title has 3 miniseries: Team 7 in 1994 and two sequels, Team 7: Objective Hell in 1995 and Team 7: Dead Reckoning in 1996.

A couple of reboots were made in The New '10s for DC Comics, both as All-Star Cast of both DC and WildStorm members. The first team was seen in Flashpoint as a black ops group killed in Afghanistan with Grifter The Leader and the sole survivor of the attack Grifter would later found La Résistance against the Amazons. The second one was part of one of the titles of The New 52, also a paramilitary group like the first incarnation but with the difference it was made to prevent future metahuman threats in the first years of metahuman appearances.

See also Gen¹³, composed by the offspring of various of Team 7 members; and Point Blank, where Lynch, Cash and Slayton were part as a team again. Some members of this team, Grifter and Backlash, have their own articles here in TV Tropes. Also, the New 52 incarnation has its own page here.

Team 7 provides the next examples: