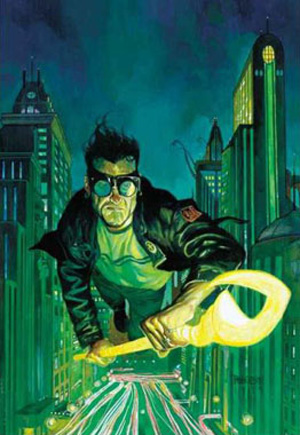 Jack Knight as Starman, in his Civvie Spandex.
Advertisement:

Starman is also notable for Robinson's dusting off of plenty of older characters. Golden Age Card-Carrying Villain The Shade, for instance, returned as an Anti-Hero, complete with a backstory. The entire Starman legacy was touched upon, with most of the characters involved (especially the original, Ted Knight) growing out of the one-note molds from their original stories. Along the way, Ted Knight's colleagues in the Justice Society of America were highlighted and brought back to prominence, eventually leading to the highly popular JSA title. (Jack was briefly a member, and new-JSA founder Stargirl carries on his legacy.)

Jack Knight first appeared in Zero Hour: Crisis in Time! #1 (September, 1994) and soon graduated to his own title. The ongoing lasted for 81 regular issues (October, 1994-August, 2001), though numbering begun with #0. Starman was also one of the series revived as part of the Blackest Night event.

open/close all folders
List of Starmen
The book makes extensive use of previous Starmen. For a brief list:
Advertisement: