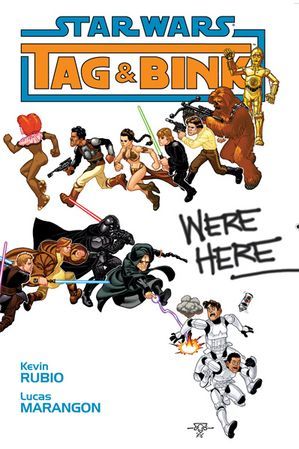 Officers Tag Greenley and Bink Otauna were minding their own business aboard a familiar, princess-harboring freighter when they suddenly found themselves under siege. Now under attack by the Empire, they will choose life over a noble death and “borrow” the armor off a pair of deceased stormtroopers. Their new disguises might get them off the freighter alive, but they’ll also lead Tag and Bink on an adventure neither could have predicted!
— Plot summary of Tag & Bink Were Here

Set during the Star Wars films, the Tag & Bink series of comics comprises four issues and one short comic in Star Wars Tales, focusing on the titular duo, who happen to be random cases of Those Two Guys throughout the saga. The first three comic books cover a single movie in the original trilogy and the fourth covers the entire prequel trilogy. The "Return of Tag & Bink: Special Edition" issue was the "special edition" of the short comic, "The Revenge of Tag & Bink". As part of the Infinities brand, all of the stories are explicitly non-canon.

The series was created by Kevin Rubio (also known for the fan film, TROOPS). Following the success of Kevin's shorts that appeared in Star Wars Tales, Dark Horse Comics and Lucasfilm commissioned Kevin to do a two-part original series, which became "Tag & Bink Are Dead 1" and "Tag & Bink Are Dead 2" (Often referred to by Kevin as "Tag and Bink Live").

The stories themselves are comedic in nature and based in part on Tom Stoppard's Rosencrantz and Guildenstern Are Dead - an award winning play that centers around the lives of two minor characters in William Shakespeare's Hamlet. But in the case of Tag and Bink, we follow two hapless rebels in the Star Wars universe, as they cross paths with almost every major character, in both the original and prequel trilogy.

Despite the limited number of issues, Tag and Bink have achieved a cult status in the Star Wars universe.

The titular duo have since become Canon Immigrants with their appearance in Solo (although their scenes didn't make it into the theatrical release), an unusual case as they were from the Infinities brand, which was explicitly considered non-canon even in the context of the Legends continuity.

Tag and Bink provides examples of: