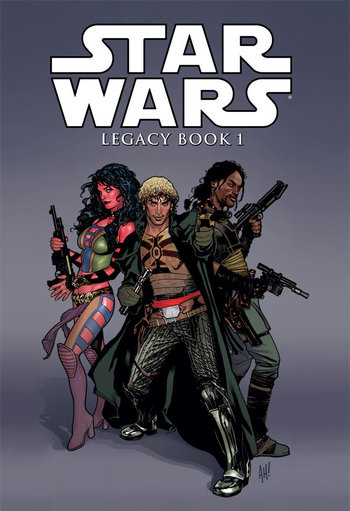 "All new Sith Order! All new Empire! All new Skywalker!" 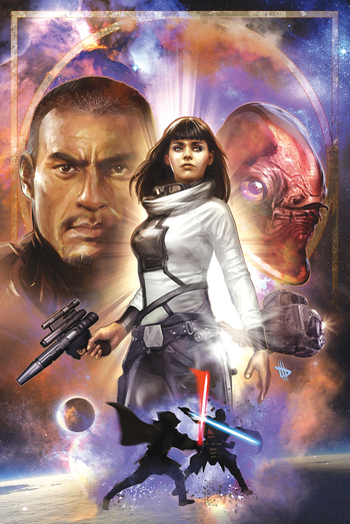 "Exploring the galaxy… Solo style!"
Luke Skywalker: I know all about the dark side, Cade. More than you do. You wouldn't have to go there to heal, not if you were at peace with yourself. If you completed your training, if you had just accepted your legacy—
Cade Skywalker: Be a Skywalker?! That's turned out real well for our family, hasn't it?!
Advertisement:

Star Wars: Legacy is an American comic book series set in Star Wars Legends. The series, published by Dark Horse Comics, is written by John Ostrander and Jan Duursema, and illustrated by Duursema and others, with inks by Dan Parsons and color by Brad Anderson. Issue #0, which cost 25 cents and introduced the setting and major characters, was released on 7 June 2006. Despite being Dark Horse's second best-selling title (after the Buffy comics) the series was canceled for unknown reasons in early 2010. The final issue, Star Wars Legacy 50: Extremes, Part 3, was released July 28, 2010, with a follow-up miniseries, Star Wars: Legacy—War, released in December and concluding the following May concluding the series.

Star Wars: Legacy begins 126 years after Return of the Jedi and many decades after everything else that happened since. In the aftermath of a failed terraforming project spearheaded by the New Jedi Order and a group of Yuuzhan Vong reformists, the Galactic Empire (now a less dictatorial, constitutional monarchy under the rule of Emperor Roan Fel) has again declared war on the Galactic Federation of Free Alliances (the successor state to the New Republic), gaining the assistance of a restored Sith Order led by the mysterious Darth Krayt. The story picks up shortly after the Empire has succeeded in recapturing Coruscant...

...at which point the Sith predictably mount a coup d'etat against Emperor Fel and lead an attack on the Jedi Temple on Ossus, where Luke Skywalker's descendant, Cade Skywalker, is training as a Jedi with his father. Most of the Jedi on Ossus are killed, but Cade is rescued from his crippled starfighter by Black Sun-affiliated Space Pirates led by Rav, who takes him as an apprentice to Work Off the Debt.

Seven years later, Cade is the leader of a Bounty Hunter crew with his best friend Jariah Syn and his on-again-off-again girlfriend Deliah Blue, having degraded into a venal, harsh and violent man who uses drugs to ward off the pangs of what's left of his conscience (not to mention the Force ghost of Luke Skywalker himself). Meanwhile, Alliance Admiral Gar Stazi has taken command of what's left of the Alliance military and fights a guerrilla war against the Sith Empire, while Emperor Fel (who escaped by means of a Body Double) and his Imperial Knights (basically Imperial Jedi bodyguards) work to hang on to what remains of his own Empire, and both struggle to overcome the bad blood from the recent conflict to defeat Darth Krayt and once again restore freedom to the galaxy.

Its revival/sequel was announced on December 3, 2012, and its first issue was released March 20, 2013. Written by Gabriel Hardman and Corinna Bechko, Star Wars: Legacy Volume 2 shifts focus away from Cade and onto Ania Solo, the great-great-granddaughter of Han Solo and Leia Organa Solo.

Collectively, Legacy is considered to serve as the Grand Finale to the Expanded Universe — no stories chronologically took place in the EU after these stories. Given that Disney now owns the franchise, and that they have declared the old EU to be an Alternate Continuity in respect to their new films, it is unlikely that any story taking place after these events will be published — although, thankfully, the story ends on a conclusive and victorious note.

The Cade Skywalker series was reprinted by Marvel Comics as part of the Epic Collection in three omnibus volumes beginning in 2016.

Not to be confused with Legacy of the Force, which is set about 90 years before this series starts but is loosely tied to it and also features a renewed Galactic Civil War.

The Legacy-era in general contains:

"My eyes are open. I have seen the vision. I understand now. No more doubts or questions. I know my place in the galaxy. I know who I am... I am a Jedi. And you are not my Master."