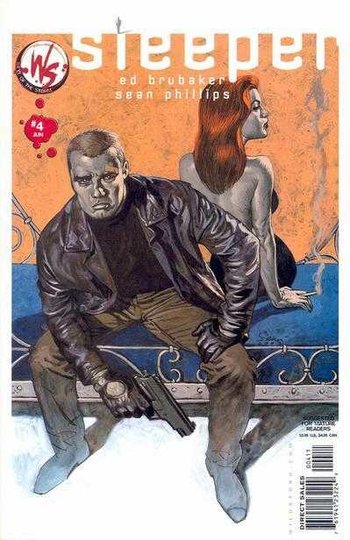 A comic book series by Ed Brubaker and Sean Phillips, set in the WildStorm universe, combining Noir and superheroes. Originally introduced as 12-issue mini-series (March, 2003-March, 2004). It spawned the one-shot "Coup D'Etat: Sleeper" (April, 2004) and the sequel "Sleeper: Season 2". The later was another 12-issue series (August, 2004-July, 2005). Sleeper was preceded by a 5 issue miniseries called Point Blank that effectively acts as a prelude, so tropes present in Point Blank are discussed here.

Holden Carver used to be a black ops operative for the American government agency known as International Operations. When his late father was revealed to have been a traitor, Carver stole a retrieved alien artifact and went rogue, eventually joining a syndicate of super-powered criminals run by supervillain Tao (formerly of the WildCATs).

Except that's not true. Carver unintentionally became bonded with the artifact while on a mission; he was recruited to infiltrate the syndicate by his mentor John Lynch. The preceding is just a cover story.

That is until a failed assassination attempt sent Lynch into a coma, and the cover story became, for all intent and purposes, reality. Carver then has to find his own way out while doing more and more questionable things to maintain his cover.

Not to be confused with the Woody Allen film.