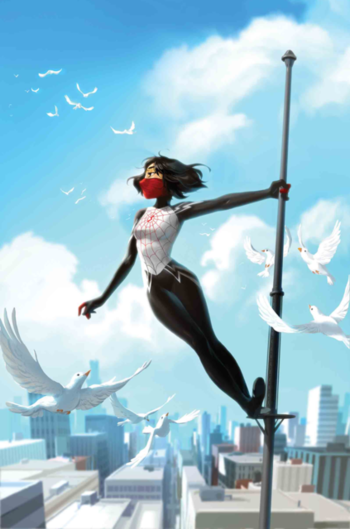 "My name is Cindy Moon. Intern by day. Super hero by night. Actually, I fight crime by day, too. And I also intern by night—you get the idea. Ten years ago, I got bit by a radioactive spider. See Previous, Re: Super Hero. Shortly after that fateful bite, I was locked inside a windowless bunker. For ten years. I did it to keep my family safe. To keep everyone safe. Safe from jerkstones like Morlun and his family. But now that threat is gone."
— Cindy Moon
Advertisement:

Silk is a Marvel Comics superheroine who is first introduced into Marvel Universe in the first issue of The Amazing Spider-Man Vol. 3 (April 2014). She's created by Dan Slott and Humberto Ramos.

During the Original Sin storyline, Spider-Man would be exposed to the energies of the Watcher’s eye alongside his fellow heroes. As secrets began to flow into his head, Spider-Man saw that the radioactive spider that bit him managed to bite another before it died—a young female student named Cindy Moon.

After she was bitten by the spider, Cindy’s abilities manifested but she was unable to control them. Some time later, Ezekiel Sims would approach the Moon family to offer his help and guide Cindy in controlling her newfound abilities. After six years since getting bit and training to use her powers, Cindy is locked up inside a facility by Ezekiel to protect her and the other “spiders” from Morlun and his family: The Inheritors. But she was later freed by Peter Parker, kicking off Morlun's biggest hunt ever.

During Spider-Verse, she appeared in the first arc of Spider-Woman volume five, teaming up with Jessica Drew before spinning off into her own ongoing series in February 2015, written by Robbie Thompson (known for his work on Supernatural). Initially running for seven issues, Silk, like many other titles, was put on hold for the massive Secret Wars event, but returned with a new volume during the All-New, All-Different Marvel initiative later that year. In the second volume, Silk is working for Black Cat, or so it seems as she is actually a mole for SHIELD, but things start to get complicated, as Silk gains some anger issues as well as having a hard time remembering Black Cat isn't her friend. This volume ran for nineteen issues.

Cindy appears (in her unpowered, civilian form) as a classmate of Peter's in 2017's Spider-Man: Homecoming, played there by Tiffany Espensen, later reprising the role in Avengers: Infinity War. In June 2018, it was announced that Sony began developing a film based on the character

, reportedly later retooled into a series

for Prime Video by 2020. It will reportedly be the first in a franchise of series for the streamer set in Sony's Spider-Man Universe, but it has not yet been confirmed if Espensen will reprise her role. It was also reported in December 2018 that Silk would feature in a spinoff of Spider-Man: Into the Spider-Verse, alongside Spider-Gwen and Jessica Drew, tentatively titled Spider-Women.