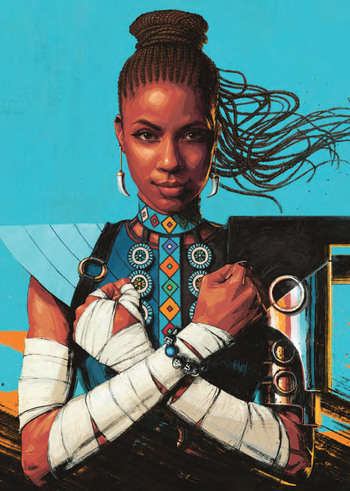 Shuri is the younger sister of T'Challa, king (and protector) of Wakanda. Though she's now considered an integral part of the Black Panther mythos, she only made her first appearance in the comics decades after his debut.

Growing up in the shadow of her older brother, Shuri wanted badly to become the Black Panther, but fell short of that goal. When T'Challa was rendered critically injured in a battle with The Cabal, Shuri was deemed worthy by the Panther God to succeed him in the role of Black Panther, and became the first full queen of Wakanda in the process. She remained Black Panther until her death a few years later, sacrificing herself in a standoff against the Black Order.

She didn't remain dead for long, however, as T'Challa successfully resurrected her following the restoration of the Marvel Universe. After helping end a rebellion within Wakanda, Shuri was made a member of its new ruling council. During this time, she also became the subject of her first-ever solo series, simply titled Shuri.

As a major supporting character of T'Challa's, Shuri has appeared frequently in other media, most notably within the Marvel Cinematic Universe, portrayed there by Letitia Wright. This version of the character is slightly different from her comic book counterpart, giving Shuri an emphasis in Wakandan sciences, as well as a snarkier personality.