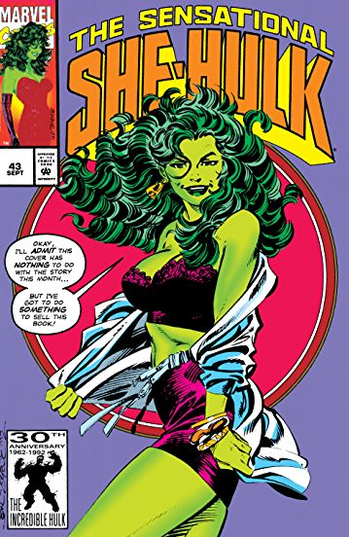 "Okay, now. This is your second chance. If you don't buy my book this time I'm gonna come to your house and rip up all your X-Men."
— She-Hulk, the cover of issue #1
Advertisement:

Sensational She-Hulk is a Marvel Comics title published from 1989 to 1994, largely written & drawn by John Byrne note issues #9 — #30 cycled through different writers and artists before Byrne returned to the title on #31, staying onboard till #50.

As suggested by the title, it stars Jennifer Walters — better known as She-Hulk — in her second ongoing series, succeeding Stan Lee & John Buscema's Savage She-Hulk, as well as a 1985 Marvel Graphic Novel with this same name, also written and drawn by Byrne himself.

Sensational She-Hulk is notable for Breaking the Fourth Wall so rampantly that it basically doesn't exist, with Jen regularly addressing the audience mid-story, as well as chastising Byrne and his entire creative team for putting her in ridiculous circumstances that include Mole Man nearly taking her as his wife, being romantically pursued by Santa Claus, and squaring off against a team of reanimated dead mutants.

Furthermore, she even interacts with the comic book medium itself, oftentimes erasing herself from panels, grabbing boxes containing dialogue, narration, or editorial notes, and tearing her way through pages to get out of a pickle.

Byrne is the creator mostly associated with this run, but other writers and artists involved in the making of Sensational She-Hulk during his time off the book (from issues #9 — #30) include Steve Gerber, Bryan Hitch, and Louise Simonson.

While Sensational She-Hulk wasn't the first comic book to break the fourth wall, it's perhaps one of the best-remembered (and earliest) examples of the trope in the medium. She doesn't acknowledge the fourth wall as much anymore in recent comics, but she still occasionally reminds readers that she knows they're there. You weren't the first to do it, Deadpool!

So you want tropes, huh?

Alternative Title(s): The Sensational She Hulk