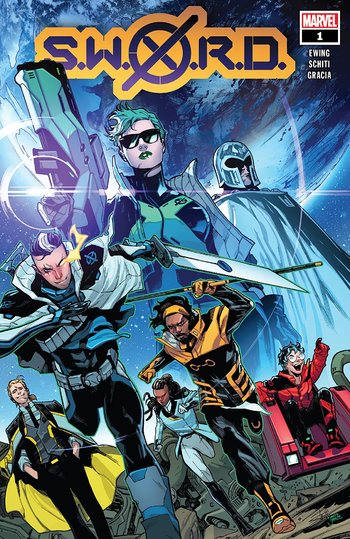 Welcome to S.W.OR.D. Station One.
"This is what comes next."
— Commander Abigail Brand, S.W.O.R.D. #1
Advertisement:

S.W.O.R.D. is a 2020 Marvel comic book series, written by Al Ewing and drawn by Valeroi Schiti, as part of the Dawn of X event.

Abigail Brand was the head of the Alpha Flight Space Program, but feeling irritated by human bureaucracy and left out of the loop regarding Earth-shattering disasters, she quit. Now she is once again the head of S.W.O.R.D., the Sentient World Observation and Response Department, on the newly reclaimed space station the Peak, with the new mutant nation of Krakoa and the Quiet Council as her new boss.

Now, the Mutants of Earth have their own space program. And Brand has ideas. Big ideas.

Prior to the 2020 comic, there was also a 2009-2010 S.W.O.R.D. comic by Kieron Gillen and Steven Sanders. It, unfortunately, lasted only five issues before being cancelled. After it was cancelled, Gillen used some of the same characters (and S.W.O.R.D. itself) during his Uncanny X-Men run. The entire run can be found in the trade paperback S.W.O.R.D.: No Time to Breathe.

The series lasted eleven issues before ending, being followed by by X-Men Red (2022).