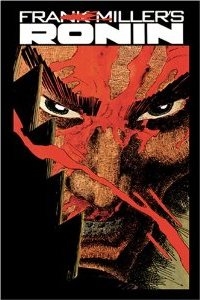 Ronin is a comic book limited series published by DC Comics. The series was written and drawn by Frank Miller with water colors by Lynn Varley. The series publication ran between 1983 and 1984 with a total of six volumes.

The story begins with a samurai who is charged with defending his master, Ozaki. However, Ozaki is assassinated in the night by a demon in revenge for stealing the sword of the demon's master, Agat. Ozaki's spirit grants the now-ronin the sword, the only tool capable of slaying the demon lord it had been stolen from. The ronin then goes on a journey to slay the demon, who on his dying breath curses him to the same eternal prison as itself, within the sword.

The story then cuts to a near-future dystopic New York City, a lawless wasteland. What is left of civilized New York lives inside a massive complex called Aquarius, which is owned by the ominous Aquarius Corporation and run by three people: Peter McKenna, a scientist who invented biocircuitry; Casey McKenna, the head of security who is also Peter's wife; and Mr. Taggart, the corporate head of Aquarius. The city is powered by Virgo, a sentient computer who is gaining more and more control over Aquarius. Finally, we are introduced to young Billy Chalis, an autistic man with no limbs who seems to have telekinetic powers. Unlocking the key to his powers may provide a brighter future for Aquarius and civilization as a whole, according to Peter and Virgo.

Meanwhile, by unknown means, the ancient Japanese sword is discovered, releasing Agat and the ronin. They continue their blood feud throughout Aquarius and across the wastelands of New York. Casey looks into the matter, eventually discovering the truth behind it all.

The series takes many influences from Manga, and is stated to have been inspired partly by Lone Wolf and Cub. Ronin also holds the distinction of having been printed on Baxter paper stock similar to Camelot 3000, as well as having no advertisements.

Not to be confused with the 1998 film Rōnin.